Vietnam -- What I did On Ho Chi Minh Birthday.

The name Ho Chi Minh means "he who enlightens." His birthday is May 19th.  I don't care about the year as much as the day because on that day, I was given the task of moving the 2 minute section to a safe location.

Because G-2 -- that's the designation for the intelligence section of the 101st Airborne Division or any other division for that matter -- recommended to G-3 that we do so.

Not really sure. All I know was around 8pm on May 19th, I was given instructions by Lt Craig Geis to go over to the A Troop, 2/17th Cavalry and tell the S-3 operations officer that a Col by the name of Dyke had given the Battery -- and ultimately me -- a direct order to move the Cobras off the Bull Pen and over to that location.

Guess I was good at doing these things, too. I had already done this once before with A Company, 5th Transportation Battalion being the location of choice to land our Cobras about 10 days prior. 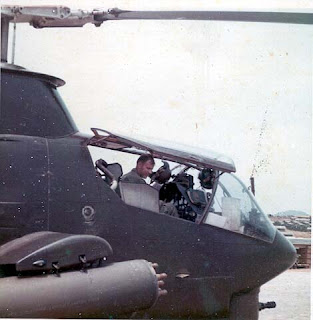 I felt comfortable working with moving the Cobras over to the A Company, 5th Transportation Battalion temporary home away from home as I knew the people there are that made it easier for me to get permission, lay out the sand bag lights as a directional guide.

But going over to A Troop, 2/17th Cavalry, well that upped the pucker factor by a few notches. To further complicate things, I had never been over to A Troop and had no idea where the TOC was located.

The Cobras took off about the same time I did, so there was additional tension of them running low on fuel I couldn't find the TOC and convince the S-3 this was for real.

As luck would haved it, it turned out there were signs leading me to the Troop TOC.  So that wasn't as big of a deal as I had thought to find. I pulled up next to the TOC and parked. After turning off my jeep with the deciphering book around my neck, this SP4 walks into the TOC.

"I need to speak with the S-3 about a matter of imporatance."

"Sir, I need to bring two Cobras over here from the 4th Battalion, 77th Field Artillery."

"Sir, I have a direct order from Col. Dyke, G-3 to bring the 2 minute section over here this night and only this night for the exact reason you just gave."

He looked at me in silence and then said, "Alright, bring them in two the open Cobra bays. I want you off my tarmac by no later than close of business tomorrow."

"Yes, sir,"  I said.  I saluted him and left the TOC. I could see where the other Cobras where and where the two empty bays where. So, I put myself in the middle of the tarmac beside them.

"Thirteen Echo. You ready for us?"

"Roger that. I'm blinking my lights."

"Roger, have you in sight. Once we're close, mind turning them off."

I turned off my jeep lights and sat on the hood of my jeep as I watched the Cobras land, turn into their new parking spots.

A few minutes later, after helping to tie down the blades, we were on our way back to the Bull Pen.