work would not be complete without talking about AH-1G Cobra food. More specifically, the various types of rockets we fed our Cobras. 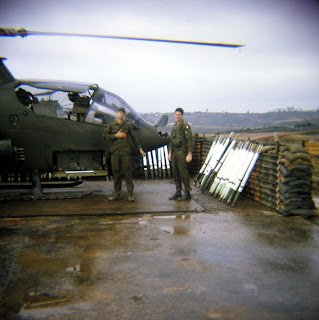 Back behind the pilot on the right are a combination of both 10 and 17 pound warheads.  There's only two 17 pound rockets in the middle of various types of 10 pounders.

The two at the farthest end of that row are M255E1 Flechette rounds. Those are the ones with the beige cones.  Those rounds were classified for a while. Not too many people know what those rounds are or what they do. I can tell you now.

When fired, the round slows down. a firing pin releases once the round starts to slow down and produces a red cloud of colored dust.  Inside that cloud are hundreds of flying nails. If Charlie was high, he could get hit with many rifle shots and still kill you. A round like this nailed his ass to the ground.

The technical sheet for the rest are:

M151 High-Explosive. The M151 HE (diagram) is an antipersonnel, antimaterial warhead and is traditionally referred to as the 10-Pounder. The bursting radius is 10 meters; however, high velocity fragments can produce a lethality radius in excess of 50 meters. The nose section is constructed of malleable cast iron which is threaded to receive the fuze. The base section is constructed of steel or cast iron and is threaded so that it can be attached to the rocket motor. The base section and the rocket motor are welded (brazed) together. Total weight of the loaded, unfuzed, warhead is 8.7 pounds, of which 2.3 pounds is composition B4. The M151 can use M423, M429, or M433 fuzes.

M156 White Phosphorous (Smoke). The M156 (diagram) is primarily used for target marking and incendiary purposes. It ballistically matches the M151 and is of similar construction. Filler for the

M229 High-Explosive. The M229 HE (diagram) warhead is currently in the inventory. An elongated version of the M151, it is commonly referred to as the 17-Pounder. The M229 filler consists of 4.8 pounds of composition B4 and can use the same fuzes as the M151. Its unfuzed weight is 16.4 pounds.

M247 High-Explosive, Dual-Purpose. The M247 (diagram) is no longer in production; however, some of these warheads may still be found in war reserve stockage. With a shape charge for antiarmor capability, the M247 employs a cone-shaped charge like that of the M72 LAW. The point-initiated detonating fuze is an integral part of the warhead. The weight of the M247 is 8.8 pounds, of which 2.0 pounds is composition B.

M257 Illumination. The M257 (diagram) illumination warhead provides one million candlepower for 100 seconds or more. It can illuminate an area in excess of one square kilometer at optimum height. A deployed main parachute descent is approximately 15 feet per second. An M442 integral fuze provides a standoff range of approximately 3,000 meters with the MK40 motor and approximately 3,500 meters with the MK66 motor. The weight of the M257 is 10.8 pounds, of which 5.4 pounds is magnesium sodium nitrate.

M259 Smoke-Screening (White Phosphorous) The M259 (diagram) smoke-screening warhead is in inventory but is not currently being produced. It provides the capability to produce tactical smoke screens. With conditions favorable to smoke operation, 14 rockets can produce an effective smoke screen for 5 minutes. With a motor burnout fuze (M446) and an MK40 motor, the warhead can provide a stand-off range of 2,500 to 3,000 meters. The weight of the warhead is 8.8 pounds. An improved smoke warhead, the M264 smoke screen (red phosphorous) is in development to replace the M259. The M264 will employ the M439 fuze.

M261 High-Explosive Multi-purpose submunition. The MPSM HE (diagram) warhead provides improved lethal effectiveness against area targets such as light armor, wheeled vehicles, material, and personnel. It has a plastic nose cone assembly, an aluminum warhead case, an integral fuze, an expulsion charge, and nine M73 (diagram) submunitions. The primary warhead fuze (M439) is remotely set with the ARCS, MFD, or RMS to provide range (time of flight) from 500 meters to approximately 7,000 meters. On the AH-1, the RMS is programmable only from 700 meters to 6,900 meters.

Initial forward motion of the rocket at firing initiates fuze timing. At fuze time an at a point before and above the target, depending on the launch angle and range, the expulsion charge is initiated. The SMs are separated by ejection, and arming occurs when the RAD (ram air decelerator) deploys. The RAD virtually stops forward velocity and stabilizes the decent of the SM. An M230 omnidirectional fuze with an M55 detonator is used on each SM and is designed to function regardless of the impact angle.

Each SM has a steel body which has a 3.2-ounce shaped charge of composition B for armor penetration. The SM is internally scored to optimize fragments against personnel and material. Upon detonation, the shaped charge penetrates in line with its axis and the SM body explodes into high velocity fragments (approximately 195 at 10 grains each up to 5,000 feet per second) to defeat soft targets. The fuzed weight of the M261 is 13.6 pounds.

M274 Smoke Signature (Training). The M274 (diagram) smoke signature training rocket provides a ballistic match for the M151HE warhead. The casing is a modified WTU-1/B with vent holes or blowout plugs. A modified M423 fuze mechanism is integral to the warhead. A cylindrical cartridge assembly is in the forward section of the casing; it contains approximately 1.4 ounces of potassium perchlorate and aluminum powder which provides a "flash, bang, and smoke" signature. The M274 weighs 9.3 pounds.

The M255E1 flechette warhead, which contains approximately 1,180 sixty-grain hardened steel flechettes, is in limited production. It has possible air-to-air as well as air-to-ground application. The M255E1 is designed for use with the M439 fuze
Posted by Richard T. Edwards at 10:29 PM