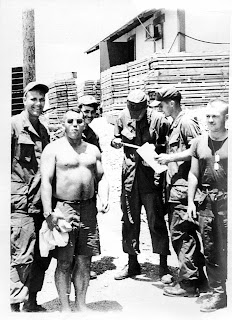 Now that I have your attenton, here is a image that makes widows cry.

They says a single line of truth is worth more than thousands of lines of supposition. And a picture is worth a thousand words. This is one of those images.

Back behind these merry men of both Commissioned And Warrant Officers is their officer's club.

Only, at this point on the time line of fate, the club was turned into our Tactical Operations Center TOC. Here's your movie stars, your heroes and your celebrities. A group of characters defying description.

Some of these men died after this picture was taken. Some lived on and learned how to be leaders. None came home unaffected by their experiences during their tour of duty.

I can't say what it was like to be in their shoes. In fact, I really have no desire to be one or to have had to have gone through what they did.  What I can say is that from an enlisted man's point of view, these men were the privileged lot.

If it appears to you that I am still mad about all these truths. Its because I was never given this picture when I signed up. I can assure you that had I been given the opportunity to see just how demuring being in the military is, I would have found another way to make a living.

But I didn't have that informaton and I did make the choice to serve.

Truth is, no finer a group of individuals could have been assembled to add flavor and character to my memories.
Posted by Richard T. Edwards at 5:35 AM