Vietnam Battalion Stringer -- Part One: Learning how to take pictures and write stories

It is strange how destiny works.

Back in 1968 while I was going to Moorestown Senior High in Moorestown, NJ the last thing on my mind was learning how to take pictures. Graduating, girls, working, girls, running my flying club and girls were on my mind.

Girls were entertainment.  The came in all shapes and sizes.  Some were cute, some were ugly and some were social snobs. It was a candy store.  But be careful, the candy store had teeth, claws and nails. And when you were a sensitive shy I want to paint your body gold kind of guy a daily dose of putting you in your place was expected behaviour from them.

Up on Main Street a camera store. It isn't there anymore but when it was,  every once in a while I would go there to drool over Nikon cameras and lenses. But I was really there for another reason. I just liked the smell of the chemicals.

I also liked the girl who used to work behind the counter, too.

So, now and until the day I left Vietnam, my job was to write up news releases, take pictures of promotions, awards and decorations, and get the 4th Battalion, 77th Field Artillery some much needed and deserved media coverage.

I was scared shit less.

So, they handed me this view finder camera. Wasn't much to the camera. I really didn't know a thing about cameras.

Rule number one:
Don't open the camera up with film in it.  Did you know that doing so destroys the film? I didn't.

Rule number two:
When the camera runs out of film you're supposed to stop shooting.

Rule number three:
Rewinding the film back to frame one and using the same roll of film causes double exposures.   Yeah, I didn't know that one at all either.

Rule number four:
Take the lens cap off before taking a picture. I couldn't figure out why all my images came out black.

Rule number five:
When someone asks you if your film actually went through the camera, you don't pull it out and show him.

Rule number six:
When you're taking a picture indoors with a flash, don't use 125th of a second, only half of the image will come out.

Rule number seven:
Color slide film is not a black and white film. D76 is a lousy color slide developer.

Rule number eight:
When purchasing Panotomic-X film from the PX because someone said you can make big prints from it, don't count on the film to make big prints of blackness look better.
Use Tri-X instead. You get ghosts instead of nothingness.

Rule number nine:
When taking pictures indoors,  make sure you use a flash.

Rule number ten:
F Stops don't make the picture bigger or smaller nor do they help you to focus the picture. Even though a slightly out of focus image can be sharpened up with a higher F Stop,  much better to get a sharp image by focusing the lens correctly in the first place.

Rule number eleven:
Never drop a camera out of a chopper.  It may cause the helicopter to crash.  Flying cameras can friendly on the ground. Also should your camera be in tact an discovered by the enemy, it could cause the end of the war. "Enemy dies laughing at stringer's mad attempts to take pictures.  The war is over!"

Rule number twelve:
Don't add the same picture of the same person to 12 news releases. 11 of the 12 will write Congressionals wanting to know why the government has been secretly turning everyone into zombie clones of the guy below: 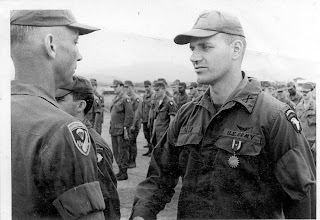 This is a picture of retired LTC Graig Geis being awarded an Air Medal. I didn't take this one. But it is typical of the type of picture taken during an awards and decorations ceremony. Save for one thing.  Would have been nice if the handshake was in the picture.

I tend to be more interested in taking the image from the left side. From that angle, you can read the name of the award or decoration recepient. Important, when you want to be able to identify the image with the news release they filled out.

When many soldiers saw me with a camera, I knew what they were thinking, "That SP4 Edwards sure has a gravy job."

The truth is, I not only had to look as sharp as they did, but I also had to deal with reporters, photographers and, more importantly, editors.

Even if I was a very good writer -- which I wasn't -- selling editors on story ideas was an up hill climb. So, how do you grab the attention of the editors and keep that attention going until you leave country?

Well, for one thing, you use the fact that your Battalion was much different than any other artillery unit. But that will not get you far as artillery is a major player in the role of supporting our ground forces.

What makes the unit stand out? The officers would argue that the battalion has some of the sexiest guys on the planet. And you look at them in such a way that says, "If you aren't going to help stay out of my thoughts."

Then it hits you like a ton of goose bumps, we provide close proximity air to ground support.  "We take the worry out of getting too close!"

Okay, cute phrase but what makes our mission different than say the Cavalry Cobra Gunships?
Well, air to ground...wait a minute...air to ground. Point A to point B.  Ground is solid but in the air, what would you call it when you use a Cobra for something other than a gunship?

Well, for one thing, the Cobra is well known for its ability to alow the pilots to get a 180 degree visual
view of the situation below them. Two wing stores on both sides of the Cobra servered as places or positions -- where 72 rockets could be fired.

From this, I had my reference points where the rockets went from point A to point B. Positions were gleaned from points.

Depending on the position -- the angle of attack ( a phrase I picked up from flying fixed wing) -- the helicopter was diving towards the ground with along with the 360 degree circle the direction of the helicopter was going determined the approach to the point where the rounds would explode.

For some reason, the notion of the Cobra used as a firing platform from which rockets and mini guns and gernade launchers could be deployed by the Aerial Rocket Artillery (ARA) made perfectly good sense to me.

So, I looked up the meaning of the word platform: "A vessel, such as a submarine or an aircraft carrier, from which weapons can be deployed."

All well and good, however, Cavalry gunships can fire rockets and have similar abilities as our Cobras, was there anything else I can use to create a line of distinction between the two units?

This was very easy for me to to do. In the first place, we used grid coordinates.

We deployed a 2, 5, 15, and standby sections. Each section having two Cobras each.

I had one more Ace up my sleeve I was about to purchase a new Ashia Pentax 35mm Camera with a brand new 50mm lens on it and a polarizing filter on the front to protect it.

I was also about to learn how to develop my own color slides.

What would happen after I returned from R&R on my second trip to Expo 70 would produce memories.
Posted by Richard T. Edwards at 9:41 AM