The way to a man's heart is through his stomach

There is one word that strikes true when hungry soldiers are looking for a hot meal.

With respect to most Vietnam Mess Halls, if Simon Cowell was critiquing food service as he was critiquing American Idol, we'd be calling air strikes just about 90% of them.

"What's on the menu tonight?"

"Nah, this stuff is too tough for Water Buffalo."

One of the hooch residents has his radio full blast at precisely 6:55 so we can't miss the bugle call of chicken man.  Non shavers like myself, get naked, wipe some deodorant under our arms, pull out some fresh socks, underwear and envelop that in a fresh pair of fully starched fatigues. The pant bottoms tucked into the shoes as seen below. Army belt and belt buckle went on next.

Army dog tags on a chain that included a P-38 can opener completed the uniform.

That's me, by the way, being given directions by a crew chief to go run over and grab him something. 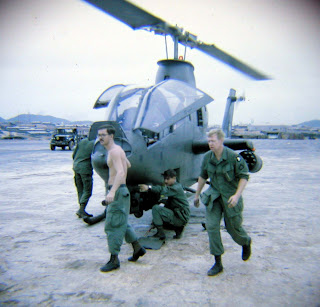 By the time you got over to the Mess Hall, you had around 30 minutes to eat.  First, you had to take and sign for a Malaria pill. Then you had to decide whether or not you wanted SOS -- which stands for Shit On Shingle, French Toast or pancakes.

This was followed by eggs and that day's meat selection. most of the time it was dried up bacon, but sometimes we had ham or sasuage.

Sometimes, we got nothing but C Rations.

Coffee and chocolate or regular milk were the drinks of choice.

Coffee was brewed in a rather field expedient way. Similar to a French press.

At around 5:30am, the diesel generators came on and the coffee gets poured into the top of a steril, 25 gallon urn filled with boiling water. 20 minutes later, the urn gets drained through a filter and what is left is poured back into the cleaned up urn.

Only problem with this is the water had a very bad clorine after taste. It is this after taste that sparked the imagination of artists who created images of men drinking the coffee and acid like mixture eating through their guts.

Most of us ate C rations for lunch and for dinner it seemed like every other day you got roast beef,  mashed potatoes and gravy and some kind of vegitable. The days inbetween was either a step up from beef -- steak or hanburgers or pork chops.

For sake of not puking our guts out we never asked where they got the meat.

Both Thanksgiving and Christmas meals were different in that stuffing, ham and turkey were offered instead of our usual daily dose of roast beef.

What I can say after eating at Mess Halls in Phu Bie and Da Nang that the closer one got to an Air Force run Mess Hall, the better the food.

Me, I personally fell in love with the John Wayne candy bars in the C Rations. And, becuase I didn't smoke back then, I had plenty of smokes to barter with for them.

If you can believe this, we also had a nightly hamburger joint open up near Eagle Bowl. You had to get there early otherwise he would be sold out within an hour.