Fire Base Ripcord was the last full confrontation between the US and the North Vietnamese.

It involved the 101st Airborne talking over an abandoned Marine firebase. The bold paragraphs are from the offical after action report.
Fire Support/Operational Base RIPCORD was to be opened on or about 1 April 1970 as a key forward fire support/operational base in the division's summer offensive plans against the 803d and 29th NVA Regiments in the A SHAU VALLEY area. Mutually supporting firebases would be opened at FSB BRADLEY (105mm how) and AIRBORNE (105mm how). AIRBORNE, in turn, was within mutually supporting range of FSB KATHRYN (155mm how).
Any notion that the firebase could provide the type of support the planners intended roll came to an abrupt end when on July 18 a CH-47 Chinook helictoper was shot down on the firebase.
The helicopter crashed in a 105mm ammunition storage area and burst into flames. The resulting fire and exploding artillery ammunition destroyed 5 105mm howitzers, 2 106mm recoilless rifles, one mechanical mule, and several other items of equipment. The remaining 105mm howitzer on the firebase was damaged.
This is where the 4th Battalion, 77th Artillery enters the picture. While C Battery up at Camp Evans was more involved with this mission, Cobras from both B Battery and A Battery were also engaged in a non stop 24x7 ARA assault on enemy targets. 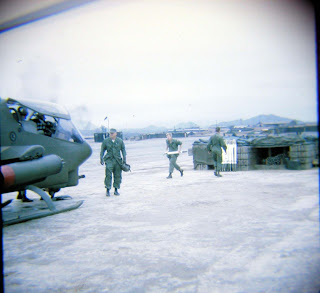 The picture above shows me and another soldier loading rockets into an A Battery Cobra as our Battery Commander looked on. To say we were busy was an understatement. 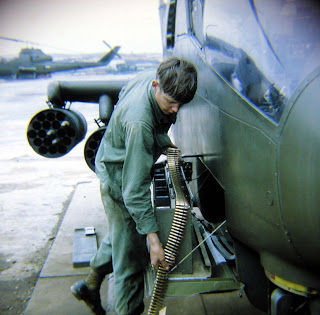 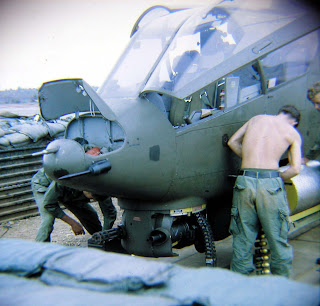 40mm grenades are being feed into the drum. Electrically driven, this drum feeds the 40mm gernade launcher.


FRIENDLY LOSSES. During the same period, US losses were 68 KIA and 443 WIA.
Casualties during the extraction on 23 July were 3 KIA and 20 WIA.

I was glad that B Battery didn't lose a single Cobra during that period of time. For once in my life I actually felt like I was a part of something bigger than life. That we were able to not only rebuild our unit, but could actually respond to this kind of mission after almost loosing everything in the rocket attack we had on May 3rd is just an amazing story in itself.

Looking back at it now, while there are no awards or decorations for doing the job I did,  knowing I was where I was supposed to be is the biggest reward I can take with me to my grave.
Posted by Richard T. Edwards at 10:14 PM