Over a year, of being of rank less than E-6, not matter what your MOS is, you're going to spend some time behind the wheel of a truck.

Of course, with what I was tasked to do, the majority of my time was spent behind the wheel of my assigned jeep. It had what we called a Prick-77 radio so I could communicate back and forth to our Battery.

I also drove a 3/4 ton truck a few times. While it might not be a Hummer, it had four wheel drive and a hoist on the front just in case you wanted to traverse streams or you had to get another vehicle without four wheel drive out from getting stuck. The problem with this vehicle was you could easily blow the 3 to 4 wheel transfer box leaving the vehicle in four wheel drive mode. I have first hand experience with this.

Two and a 1/2 ton trucks -- known as Duce And A halfs were pretty much the most popular vehicles used by the military throughout the world. They had a nice, masculine, throaty sound to them and were all pupose vehicles. 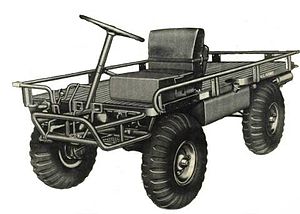 But the one vehicle I loved to drive was a Mule. All four wheels turned, the steering wheel is a bit weird  as it is not in the middle where the driver sits but in the middle of the vehicle and at an angle leaning towards the driver.

This was a fun vehicle to drive because it had a lot of low end torque. Meaning you could pop wheelies with it and piss off all the NCOs.

The problems with the vehicle included the fact that there was no way of telling how fast you were going and if you were a left handed person, you had to learn how to switch gears and drive with your right hand.

A Hobs meter kept record on the amount of hours that were put on the engine.
Posted by Richard T. Edwards at 6:59 AM