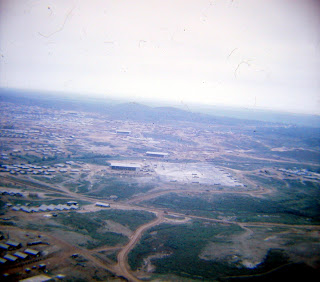 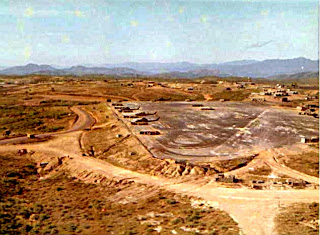 Much can happen in one year and these two images prove that point.  The one at the top was taken in March of 1970 and the bottom one, taken in 1971, is almost 180 degrees opposite of the "Bull Pen".

By the time the 3rd of May's sun would rise over Camp Eagle, the hanger five helicopters and the entire support infrastructure of the Battery would be destroyed by a rocket attack.

We got lucky the morning of the 3rd of May when the attack occurred. The worst that happened was the Crew Chief whom which got the job instead of me was thrown 30 feet into the air and went home with a concussion.  A few others suffered from cuts and minor burns.

The other significant point to be made about the top picture is the buildings to the very bottom left hand corner were those used by the 2/320th as their stand down  area. The ones just above it were the buildings used by Headquarters, 4th Battalion, 77th Field Artillery ARA.

It was from this position that I watched the enemy lob in 15 mortar rounds. I essentially watched five men die that night. The closest I was to real live combat -- short of the 122mm Russian built rockets that came in once a month.
Posted by Richard T. Edwards at 5:57 PM