After watching the TV show MASH, I can safely say that when these to are in the back seat of your jeep and you're heading up to Eagle Beach on highway one, the two were in character for John Francis Xavier "Trapper" McIntyre and  Benjamin Franklin "Hawkeye" Pierce respectively.

And after all the things I did for these two, I have the right to call myself Walter Eugene "Radar" O’Reilly.

I don't know what the two were arguing about but it escalated from name calling to helmet bashing right after getting out of Hue and heading towards Camp Evans. So distracting was it that I gave the two the evil eye through the mirror, whereby Lt. Craig Geis told me to mind my own business and to keep my eyes on the road.

Hue, by the way is a very beautiful city despite the scars of the 1968 Tet Offensive. 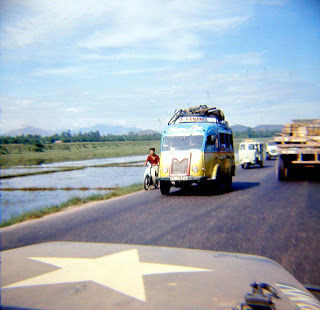 After passing Hue, the country side opens up and you see a lot more of the way people transport themselves and make a living. You also realize you're in a different world and country, too.  There were checkpoints along the way as depicted below. There were scenic spots that looked more like they should be a movie set for a Rambo film. 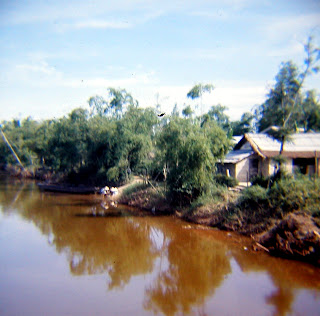 And there were water Buffalo whom which if caught the scent of American soldier would charge at you. 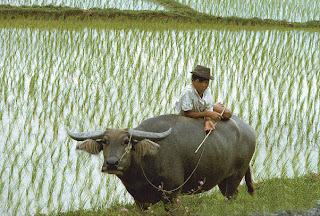 This one didn't look like it was not far from doing so.

These scenes and sites pretty much kept the two busy taking pictures as we headed for Eagle Beach.

Just before we arrived, we were treated to a ride across the canal via a US Navy LST.  Once on the other side, we where at Eagle Beach. 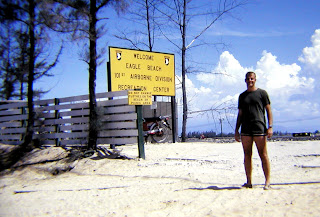 We found a place to park the jeep and secure the no longer necessary combat gear.  Since I sunburn easily, I opted to stay close to the jeep and watched the show.  Both Geis and Kramp proceeded to enjoy the white sandy beach and unwind.

I think they needed that more than I. 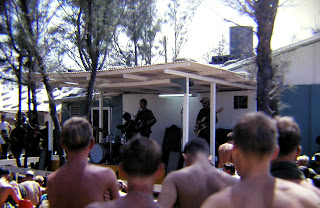 The nice thing about going to Eagle Beach is the drive back home. Both Geis and Kramp were now less tense and talked about they did and saw.

I was just glad I didn't have to create a report concerning the reasons why the two "officers" in the back of my jeep showed cuts and bruises from all the helmet bashing the two did to each other.

Three hours later, we're back at the Bull Pen.  Dropped the two off over at their quarters, washed and waxed the jeep and headed over to A Company, 5th Transportation Battalion to check on some parts I ordered.

With that done and the jeep parked for the night, I called it the night and hoped no 122mm rockets would ruin that thought.
Posted by Richard T. Edwards at 11:13 PM

Thanks for this, I was stationed at a place called Tan Mei Island, I don't know if the spelling is correct but I was told that it was called Eagle Beach at one time because the 101st Airborne used it for R&R. Anyway it was close to Hue and I can't help but believe that it's the same place you speak of.

My name is Rowe and I was in country from 71 to 72.
US Army doorgunner on a Slick.

I also served at Tan My Island with F/4 slicks

Look forward to talking with you!