I also harbor the belief;  if the NVA soldiers were fed the food we were fed in Vietnam that they would have completely surrendered unconditionally. Hell, we didn't even have a Starbucks on every corner much less a Good Humer Ice Cream truck. 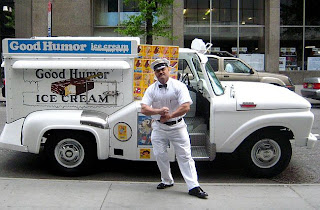 Can you imagine a world without Ice Cream?  Why it was cruel and unusual punishment, let me tell you! Some one needed to make it a war crime!

I don't expect a combat zone to have all of the creature comforts of home and when I signed up I knew some of the benefits of being in a combat zone did not include American women, big named concerts, strippers, steak or sufficient amounts of cold soda pop.

But cutting my supply line to Ice Cream, well, that's not going to cut it, I quit.

Of course, once you sign on the dotted line, you come to realize the word choice has been stricken from the words  used in the US Army vocabulary. Sill, if I had a choice between steak and American women, I'd go for the steak hands down.

I harbor the belief that if we were able to SYOPS Ice Cream, for certain, the outcome of our war efforts in Vietnam would have been completely different.

I did find out that the military was seriously considering the following to vehicle prototypes as candidates for deployment in South Vietnam. 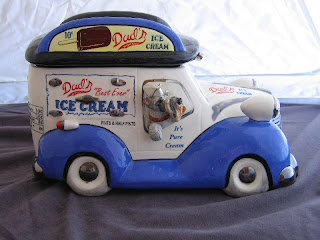 This one was removed from the list due to its high center of gravity. While it turned out that the designed truely confused the enemy it was unable to see much less shoot the one million nitrogen cooled star shaped ice cream sandwiches.

The Army planned on using them along the ho chi minh trail until they relized the cost of supplying these vehicles with the sandwiches -- code name: cold cream -- far exceeded the amount of enemy soldiers.

It was rumored that half the supply dissapeared after entering Vietnam. 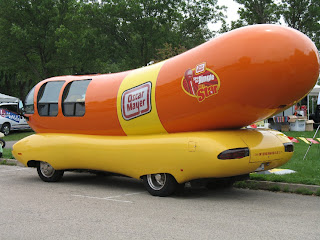 This vehicle was considered as a multi purpose command center. Looking much like an AH-1H Huey --pregnant with twins --  without rotorblades, its true purpose was to spurt mustard and ketchup out from the back end while playing the Star Spangled Banner.

While unclear how those two had any SYOPS relevance or value, SYOPS insited that the napon strikes right after dousing the enemy with spurts mustard and ketchup would put new meaning into the phrase "well done".

Sigh, a little color to an otherwise Olive Drab world.

You would think that this delicious cold product would be a big hit with the men.

For a couple of reasons.

One, Ice cream requires refrigeration and that takes fuel and electricity.

Very few of the temporary quarters had electricity and the ones that did would not have enough voltage to maintain the use of a private refrigerator for each soldier in the hooch.

Even if you could have one refrigerator in each hooch -- which a few did -- there are additional issues with having one. Aside from brown outs or black outs, there are some serious risks with owning a rather large refrigerator,

Consider the following refrigerator scenarios and, please, don't try these at home.

This is where you get the narcotics agent drunk and shove him inside.

This is where you get the NCO drunk and shove him inside.

This is where you get the REFER drunk and shove him inside.


THE DOPE A REFER

This is where you harvest Mary Jane and grow it inside.

Okay, this one is a long shot. Place the Hooch Jack Ass into a   refrigerator. Secure the sides of the unit with ample enough rockets for primary and secondary lift the way the US with a degree in rocket science said to do it. And fire off the rockets.

While it is feasibly doable, there are some other CONSIDERATIONS one might want to take a look at.

The first of which -- a minor annoyance -- is gravity. PSST. There's warheads on those rockets. I''m sure the hooch Jack Ass hadn't thought of that.

The second, really annoying over looked detail is the fact that the rockets spin. No biggie, since the human parcel has probably been G forced into non-existance by the time his body filled the refer with V8 juice!

The third, assuming the first two didn't kill him involves a -- it is rather trivial, really -- oxygen.
That combined with another not important fact is it is cold at 10,000 feet. Assuming a parachute egress at 10,000 feet and, without the proper clothing, the hooch Jack Ass would either die from asphyxiation or hypothermia.

But let's assume he managed to survive all of the above, used a para glider chute and was smart enough to build a engine driven prop he strapped on his back.  He could wind up in Laos, North Vietnam, South Vietnam or in the China Sea.

Not one of those locations would be far enough away to not be facing some pretty hard times.
So, if our hooch Jack Ass did manage to pull it off, he would most likely find himself in a worse situation.


But the guys left behind have some serious problems to deal with. How are you going to explain the hole in the roof of the hooch? Or the missing rockets? Or our missing hooch Jack Ass?

Besides, this one was done once before by a China Empire around 4000 BC -- might want to ask him how it worked out for him.


Okay, none of this ever happened. I call this human muse.  If we couldn't laugh at ourselves or come up with these really zany ideas, what would life be worth living for?

As for creativity, the stuff that actually work was called field expediency.
Posted by Richard T. Edwards at 1:12 PM