Vietnam -- The day I realized I had an angel looking over my shoulder.

This is from retired LTC Craig Geis recollection of what happened on May 3rd, 1970:

Before we could launch the 2 minute hot section a 122mm rocket struck the aircraft sitting on the ready pad. It was fully armed and fueled and it exploded in a giant ball of flames. The crew had run from the ready tent next to the flight line and was on their way to the aircraft when it exploded. The next round landed in our ammo dumps and exploded over 3,000 rockets, 100,000 rounds of mini-gun ammunition, and 25,000 rounds of 40 mm grenades. Our own rockets were flying everywhere and blew up all over the camp. They thought it was enemy rockets but it was ours. Six more rockets hit the flight line and destroyed all the remaining aircraft. The final three rockets came in and two hit the hanger and set it on fire and the other was a direct hit on the underground Tactical Operations Center (TOC). After getting out of the bunker I grabbed my rifle and my cameras and hid under a truck and took pictures. It’s hard to describe the noise and crap flying everywhere but some of the photos may help. 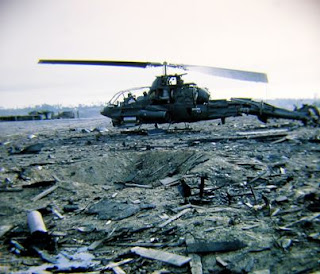 Luckily for me, I was sitting in a 24 hour Air Force Mess Hall at Da Nang wondering why it felt wrong to go back up to Camp Eagle on the afternoon of the 2nd. I could have just as easily taken the some 4:30 C-130 flight up to the Phu Bie on the 2nd as I did on the 3rd.
When we flew over my unit on final, I suddenly realized two things:
Upon arrival, I was given the task to rebuild our unit from the ground up. While I didn't build the buildings, I did do just about everything else. And then some.
Posted by Richard T. Edwards at 9:14 PM