There are often moments in your life when you just know you have to trust your instincts and allow others with the power of authority to change your course of destiny. You may not like the spin they put on your direction.  You may not want to deal with changes.  In fact, you may think, at the moment those changes are made, they weren't for your best interest, but patience and the willingness to adopt to those changes opens up opportunities and situations you didn't think possible.

The very first of these "others" was a Lieutenant by the name of Craig Geis.

Before I go into describing him and help you along with how our relationship developed, you may want to appreciate my specific quirks.

When you have just graduated high school, ran a flying club -- that flew 30 members to Lock Haven,PA, had a dad who was an SFC in the Army, spent most of your time in school working, and learned basic electronics at RCA Institute Of Electronics on your own money, coming into the US Army as an enlisted soldier wasn't going to be easy.

Did I mention I still thought the Army is nothing more than Boy Scouts who never grew up?

Add all of this to the fact that I was an enlisted soldier with a GT score of 105 -- this got up to 120 the list time I took the skill tests -- so, I didn't exactly fit in with the bulk of the enlisted with GT scores of 60.

Bottom line, I had an attitude problem. One that just didn't rub well with the NCOs.

Now, add this to the fact that I volunteered to be with B Battery, 4th Battalion, 77th Aerial Field Artillery (AFA) and instead of the starting off with a clean slate, my already was covered with crap.

SFC Valentine, followed me over from A Company, 5th Transporation Battalion. Had I known SFC Valentine had also transferred over to the B Battery, 4th Battalion, 77th Field Artillery (ARA), I would have definately taken SFC Saloman's offer. But I didn't know until the first day I arrived and it was too late to turn back.  He had already tainted my profile with the Officers and I immediately went on shotgun duty on a trash truck.

After you get past the stench and the humiliation. You begin to realize just how much C-4 (that's plastice explosive) was being carried by our soldiers and how much of it was getting thrown away. Way I calculated it, if the C-4 ever blew up, it would create one hell of a stink bomb.

"Ma am, I regret to inform you that your son was killed in action protecting a trash truck. There wasn't enough of him to fill a condom." These thoughts crossed my mind.

So, this is how I met Lt. Craig Geis for the first time.  With that said, after two weeks of being shot gun on a trash truck, one of my hooch buddies convinced me to talk a lieutenant by the name of Craig Gies. He stood straight as an arrow and was taller than 6 foot.

From that moment on, I knew there was something unique and different about him.  I saw a bit of a rebel in him that was in me. Most of the time you expect guys his size that fit the description as being tall and athletic as also being, well, not so smart: A kind of Mice and Men stereotype.

This guy was not only a big man; he was extremely intelligent and cunning. So his nickname “The Animal” upon first glance didn’t make much sense. That is, until you really started knowing the man.

This was the kind of leader you would not question.  The kind of man you want on your team. The kind of soldier you’d expect would become a hero.

His character included:
So I talked to him and explained my situation.  He listened.  Then told me there was an opening for a crew chiefs job and said he would test me to see if I would be a good fit. That took me off the trash truck duty.

While I had hoped to become a crew chief, Lt. Craig Geis was looking out for me and had other plans.

He realized I was technically blind in my left eye and even at that, when I was tired, it turned in. He also looked at my military aptitude scores and realized I scored high in my clerical skills. Based on that,
he made a decision for me that proved to be another brilliant moment for the both of us.

When he asked me where the RMI was in the Cobra. I couldn’t find it.

In Vietnam, Cobras were not certified for IFR or instrument flight rules flying. The radio magnetic indicator (RMI) would be in the cockpit if they were.

So, based on this Craig offered me a job as an aircraft maintenance clerk. It was better than riding shotgun on a trash truck.  So, I took it.

The job involved maintaining maintenance logs and activities related to that task. I also performed additional jobs such as making coffee, dealing with quick fix engineering and making sure the log books were filled out correctly, living at night up on the flight line and aiding in the launch of our 2 minute section.

For recreation, I learned how to play a mean game of ping pong.

This job lasted long enough to prove I could find a part that didn't exist at a very crucial moment when the unit would have been forced to stand down. I did this, not because someone pointed a gun to my head, but because, at that point, I knew Lt. Craig Geis was worth making sure he kept his job.

I had no idea that this would prove to be a critical moment when I found the part no more than a few weeks away when, on May 3rd, our tow minute section, our hanger, our TOC, all of the equipment, and all administrative functionality would be totally destroyed by hostile fire. 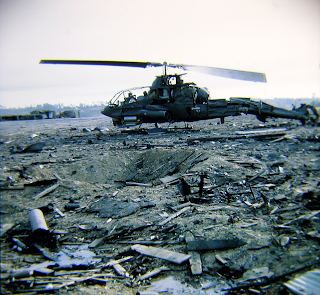 For the next 90 days, I was assigned to rebuild the unit. I succeeded. There were a few annoying incidents along the way, these included:

When all of this ended, it was time to find another job and Lt. Craig Geis suggested I become the 4th Battalion, 77th Aerial Field Artillery (AFA) stringer. It sounded interesting, so I took it and for the last momths of my time in Vietnam, I provided the battalion with much deserved publicity.

I put the TOW Cobra into the limelight in Germany with a news story done by Hillery Brown of ABC News.  I worked with David Allan Burdette as I took him out during REFORGER of 77 and have identical images published in Time Magazine.


Thus U.S. Cobra helicopters, armed with TOW antitank missiles, provided cover for West German tank units and were directed to targets by West German officers. Old tricks were also polished, like dropping a Sheridan light tank from a low-flying C-130 transport plane.
Cobra history was my business and my business was good.

After finishing Reforger 78 with a personal letter of appreciation from the Command General of the 101st Airborne Division Air Assault, in 1979, a very proud E-5 terminated his service with the military and returned to civilian life.

Lt. Craig Geis is now a retired Lieutenant Colonel. I am currently an $80/hour computer consultant working in Chicago, IL.

If Craig Geis called me up tomorrow and asked me to go to war with him, I would unquestionably say yes.  I would do the same back then as well. This isn't hero worship -- lord knows, I not into that -- I simply know an excellent leader when I see one. I saw one in Craig Geis.
Posted by Richard T. Edwards at 4:39 PM