Vietnam -- Five Days In May 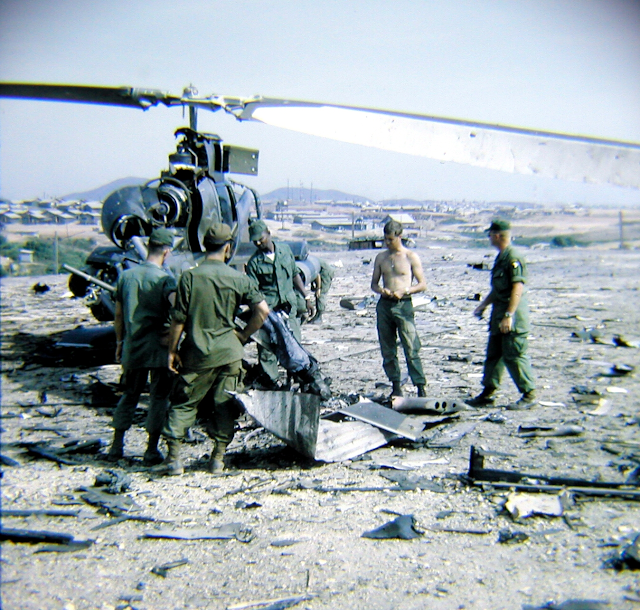 They told me that the only one who got seriously hurt that morning was the crew chief that got my job.  Apparently, he was doing something on the Cobra in this picture and was thrown 30 feet into the air.

We learned later that he came out of the comma and was in good health.
Two pilots -- besides Lt. Geis burnt hand -- suffered some minor injuries. One was Captain Winfrey. The rest of the pilots went to Eagle Beach.
I gave Captain Winfrey a sob story about not having any money and he purchased for me a ice cold Coke.
Winfrey was one of a few officers who actually would talk to an enlisted man as a human being. And as we got closer, he showed me pictures of his nine month old girl and wife.
May 4th:
My new job found me running back and forth from my new home to my old one about a half dozen times in one day. Going empty and coming back with tech manuals, helicopter parts and logbooks.


So there wasn't too much time to get sleep and only time to adhere to SFC Valentine's mid day roll call.

But I was there when he told us that the unit officially was in stand down mode.

Anyay, later in the evening of May 4th, I grabbed a cup of coffee from the pot in the logistics section over at A Company, 5th Trans and conducted my usual social conversations to warm them up into saying yes to my request for parts and  supplies.

I never got to that point in the conversation because two seemingly insane words came over the radio:

While racing back, This is insane, RT. I know, I know, You're only on two wheels, slow down.
In less than three minutes I was on the flight line and watched Jeffery Johns leave the pad without a front seat. Winfrey was yelling at me to get his front seat.

The was the Warrant Officer 1 - - we call a "wobbly one" which was having a hard time of it getting his flack jacket and such by the name of WO1 Dean L. Bonneau.
I picked him up and brought him over to the Cobra. I then closed the gunner canopy. While closing the pilots, I said,  "When you get back, I'll buy you a coke.  Winfrey smiled as I secured the latch.
I watched them take off without anti collision lights. I thought about it.  Neither did Lt. Johns.

But it did make sense to not let the enemy know we were still launching Cobras from our pad.
I had no idea that I would be the last to see him smile. As I watched the helicopter fly away I thought it odd that the anti collision lights were not on but then realized we might not want to raise that kind of attention from the enemy.
I went back over at A Company, 5th Trans and started chit chatting with the guys behind the counter.
"I thought you guys were stood down?"
"Yeah, so did I. Apparently DIVARTY didn't get that message."
My problem with my radio is I can hear more from the air than I can from the ground over distance. I would not have heard the Division Artillery call had that signal been a normal radio transmitter.
I'm also capable of hearing two conversations at once and reacting to both. After going to the R&R Center and talking with Johns, hearing his voice on the radio...there was something terribly wrong.
"Have to go."
"Hey, you just got here."
"I'll be back tomorrow, I promise."
"You better.  I want to hear more about what happened last night."
"You got it!"
I was weird not having a hanger to guide my way at night over on the flight line. The whole El Toro flight line just didn't feel right.
Eerie how death and quiet cuts sharp to the bone.
I found my way over to the mini officers club turned into our Battery's tactical operations center(TOC).
Since it was our TOC and since I usually don't knock on TOC doors, I swung open the door and was about to say something stupid like what the hell is going on.
Instead, I saw something I was not supposed to see.  Our CO and a huddled bunch of officers were huddled around the radio.  Some in shock, others with tears rolling down their faces.
Of course, the CO saw me starring and yelled for someone to get me out of there. I just let myself out.
"Dick."
"Yes, sir."
"Do you know what just happened?"
"Somewhat."
"You okay?"
"No. but I'm pissed so, that will work in my favor at the moment, sir."
"Use your lights to bring in Jeffery. Have him land and put the Cobra park the Cobra. I'm giving you a command order to pull him out of the helicopter if you have to. Take him over to the medics  and bring him back.

I will tell Valentine to leave you alone.
Get some sleep."
"Yes sir."
So, I sat in my jeep in the middle of our pad waiting for a call and feeling kind of weird about having to deal with Jeffery.  But I did. And sure enough, I had to tell him to get out of the Cobra.
Now, you got to figure a guy with a 45 who just witnessed two of his friends get killed in a mid-air over Fire base Nancy is not going to be someone you want to pull rank on. But I managed to pull it off.  Got yelled at all the way to the dispensary and back about how E-4s don't talk to officers that way....blah, blah, blah.
Finished up tying down the Cobra and went to bed.
May 5th:
I think I was barley asleep when some jerky PFC kicked my cot.
You don't kick my cot.
I come unglued when you kick my cot.
Never kick my cot.
I looked up at the PFC with knives in my eyes.
"Sergeant Valentine wants...
I didn't let that ##$#@$ PFC even finish.
"You tell Valentine to go get $@@$."
"I will..." and he went running out the door. Okay, I got back into present time and realized I was still in the Army and telling your favorite SFC to get #$#$# wasn't exactly a good career move.
I could hear Valentine, "He said WHAT"
I was then ordered into the orderly room where Valentine proceeded to do the I'm not putting up with this #$#$.  Upon completion of his rat, the First Sergeant told him to get out of his orderly room.
"Future Specialist Four Edwards.  I know what you did last night. They're putting you in for some awards.
So, I'm only going to tell you this once.  You ever tell one of my senior NCOs to get #$#$#, I will throw the book at you. Is that clear?"
"Yes, First Sergeant."
"Good, now, get out of my orderly room and do what Lt Geis has order you to do."

Implying get some sleep.
I came to attention, saluted and walked out. Went back to bed.  From that point on Valentine was no longer my boss.
Lt.Craig Gies was.
BTW, 7 people were killed that night on a practice Red Alert over Fire base Nancy. The two Cobra pilots and the five people on board the UH-1H flare ship.
Posted by Richard T. Edwards at 11:29 PM