I honestly believe there was more of a war going on in the States that there was in Vietnam. For some reason, many people thought that if a soldier came home in one piece and had ribbons, somehow, that meant you were the latest version of Audy Murphy.

I am not, nor will I ever be an Audy Murphy.

This did not make me a hero.

I was proud of my marksman and sharp shooter medals considering I had to shoot right handed and only had one eye to do it with.

But they don't and I was just another soldier who did his time in Vietnam.

One that wasn't extremely happy with a certain Lieutenant by the name of Craig Gies who changed my MOS from 67Y20 to 71T20 without telling me and I wound up going to the US Army Intelligence Center And School at Fort Holabird, MD.

Guess that was his idea of rewarding me for not being a hero.

Funny thing about it, his decision to change my MOS was probably the most Intelligent -- okay, bad play on words -- thing he did for me. But that's another set of stories in themselves.

Okay, so my mother had this brainy idea that I should go to Our Lady Of Good Counsel Church with her in uniform.

I am extremely clumsily when it comes to doing impromptu interviews. And when 30 people surrounded me after church, I felt like Custer at Little Big Horn.

I couldn't explain that I was a Cobra crew cheif over there and I did such a great job, I'm going to the United States Intelligence Center and School to be their Equipment Data Specialist. So I simply said I was a Cobra mechanic.

"What are ll those medals for?"

This one got rid of half the crowd. So, I said, "Serving in Vietnam and doing my job."

"Did you every get shot at?"

Again, I couldn't really say that someone tried to shoot me directly. But I'm sure somone in the crowd probably would have liked to when I said, "Not directly, but I was witness to a few hostile rounds' effect on my unit."

So, there was no Green Beret, there was no Audy Murphy, no John Wayne and no superman in front of them. Just a solider who did just about everything else and did it every day. 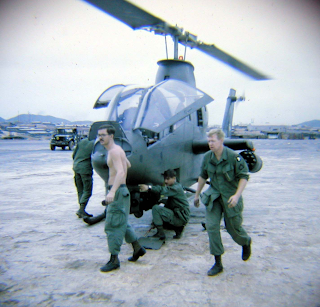 “Always there, always ready.” Captain Denny Kramp was my left hand and Richard was my right. Day or night he was there to do whatever it took to get the job done. We stole a lot of stuff together to keep things going. He watched out for me, I hope he can say the same for me. Thank you Richard.

Kind of hard not to share the same admiration for a man who watched out for me just as equally well.
You cannot see the goose bumps as I honor him with, "Sir, the feeling is mutual."

The civilians I was facing that day really didn't have any idea just how much of a hero I really was.
I just wasn't theirs.

Besides, I was just getting warmed up, by the time I was finished with my career in the military, I had three Army Accommodation Medals and close to 500 images and stories published throughout the world.

You did a great job and was right there with photos (of which I still have) and articles in a very pivotal point in Army Aviation. I salute you also and am very grateful of all the support you gave me.
Posted by Richard T. Edwards at 9:37 PM