Sometime near the middle of the year of 1970, screaming eagle replacement training school SERTS  was moved from Bien Hoa to Camp Evens.

When it was, it provided the 4th Battalion, 77th Field Artillery (AFA) with the opportunity to tell the story of the AFA.

The AFA needed to demonstrate the differences were between the AFA Cobras and the Cavalry Cobras. The unit also wanted to emphasize roll it played in supporting infantry soldiers with artillery support when the enemy was between 30 and 60 meters away.

C Battery, 4th Battalion, 77th Field Artillery (AFA) was given the task to demonstrate the AH-1G Cobra -- with the AFA configuration.

A single Cobra and a narrator on the ground were used to introduce to the men the 4th Battalion, 77th Aerial Field Artillery (AFA).

On one of those training missions, I was in the front seat of the Cobra. Below, is one of my images. 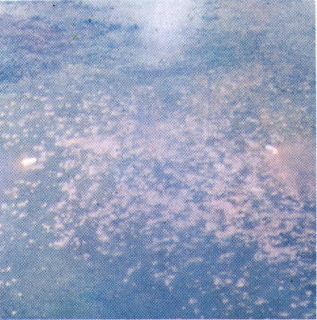 Someone asks, "what's the difference between the AFA and the gunship."


The narrator smiles, "We carry a total of 144 10 and 17 pound warheads using 2.75 in rockets using two Cobras to a specified location using grid coordinates.


"Our job is to provide support for the infantry soldiers down on the ground and in trouble.


"The Cavalry uses their Cobras as true gunships to shoot at enemy targets after the tadpole looking OH-6 harasses the enemy enough to shoot at it.


"We fire to support and save our soldiers' lives, they fire for the glory of the kill."


The first thing the SERTS  students see and hear is the throaty popping of the Cobras rotor blades.

The narrator says, "In a few seconds, you'll hear and see two rockets fired.  These are used to accurately position the location where the rest of the rounds should be fired."

After the loud hiss of rockets and sounds of the explosive impact of the rounds start to fade away, he says, "Because we are an Artillery unit, we use grid coordinates to pinpoint the location of the friendly forces on the ground. I'll tell you more in a minute.

After the Cobra goes back into a dive and the mini gun barrel sings a baritone bee buzzing burrrrrrb, the Cobra begins to climb back up to 3000 feet and gives the narrator time to continue with answering the soldier's question.

"When the grid coordinates come in they are encrypted.  That way, we're not giving away friendly soldiers position. The pilots decipher the coordinates and begin communicating with the friendly forces on the ground.

He points back up to the Cobra, "During this third pass, the Cobra will fire a 40mm grenade launcher, we call the 'chunker'.  We are able to carry 250 rounds of this type of grenade."

After the hamering explosions subsides, the narrator tells the men he's going to tell the Cobra to fire for effect.

At 3000 feet, the Cobra begins his dive and from 2100 feet to 1500 feet a steady procession of rockets -- a total of 18 pairs -- are fired down at a black 55 gallon barrel already leaking from bullet holes and shrapnel.

The narrator explains, "You have just witnessed just one half of what our Aerial Field Artillery is capable of firing and 1/4th of the total one section is able to bring to bear on an enemy target.


"We have sister units;  B Battery (El Toros) and A Battery (Dragons) -- located at Phu Bie. We are C Battery (Griffins) located here at Camp Evans.

Richard,
I enjoyed your post. My father Howard Moulton was with the Griffin's at Camp Evans in 1970. He was an armorer and involved in the support of Firebase Ripcord.
Thanks for putting this up.
Best,
Jeff