I arrived at Camp Evans around 10 am that day.  No one would care more about what was about to happen than me. I don't know how you can be excited and scared at the same time.

Furthermore, what was about to happen, wasn't supposed to. While civilian press reporter may have been able to do what I was about to do, it was next to impossible for an enlisted man to do.

I was about to be in the front seat of an AH-1G Cobra as it fired live rounds in Vietnam.

Now, that may not be a big deal to some, for me, with all the leg work I did loading these Cobras at Camp Eagle, being able to understand what happens after the Cobras took off and experiencing a fire mission would prove to be a totally awesome experience.

That is, providing that it did happen. At the time, I wasn't exactly sure if I wasn't dreaming all of this up and I would get told no at the last minute.

"No, sir, I don't," I said thinking guess its over with now.

"Not a problem, Specialist Edwards, we have a few loaners around here.  I'll have you fixed up in no time."

A few minutes later, I was wearing the flight gear and being briefed by the Cobra pilot -- a Captain (which I can't remember his name because I was so fixated on the fact that I was really about to do this, the last thing on my mind was remembering names) -- about the mission I was about to be part of.

Clarity from the fog:  "So, to sum it up, this is a SERTS training mission and you're my front seat. Touch nothing except your camera and I'll let you know once we're over our objective what I'm firing and when."

With over 40 hours of flying under my belt and a log book that had 9 hours worth loged training -- the last entry said I was ready to solo, my civilian flying experience helped me understand the instruments. The two I was most interested in was the airspeed indicator and the altimeter.

For some reason, this time, walking over to the Cobra was different.  Like being in another dimension and seeing it for the first time the way I was born to see it.  From the eyes of a pilot.

I just had one eye that worked real well.  The other liked to go fishing.

Cobras are not the easiest helicopters to get into. Facing towards the Cobra, the pilot gets in on the left side and the gunner on the right. In order to get in, you have to put your foot on a very thin foot hold and climb in. 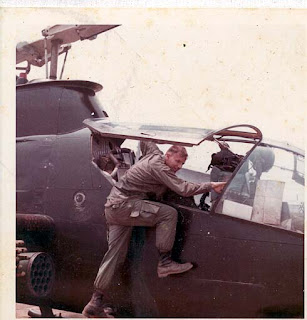 That's Lt Craig Geis climbing in on the pilot's side.  Notice his right foot is on the foot hold and it doesn't stick out far enough to support the entire shoe.  When wet, these foot holds can be very slippery.

Here's a picture from the gunner's side. You can see the foot hold just above the crossed artillery cannons.

Why am I making a big deal about this? Try getting in and out of a Cobra when you're left handed and left footed.  Add being scared out of your wits.

Luckily for me, I had already been in the front seat of a Cobra before -- but not on a mission, so, it made it easier for me to climb in.

After I climbed in, the back seat started the engine and the Cobra blades started increasing in speed until the Cobra was ready to fly. The crew chief made sure I was secured, gave me the thumbs up and I did the same. He then closed the gunner's door and secured it.

The Cobra lifted up slightly and was nosed forward to gain airspeed. It shudder slightly going through transitional left and then started flying.

Once away from the pad, we started gaining attitude. At 3,000 feet over the SERTS training area, the pilot talked to the ground coordinator for the mission and then waited for commands from him.

"Also, I want your camera." I gave him the camera. "Pentax.  Nice choice. Now, look at me through the mirror." 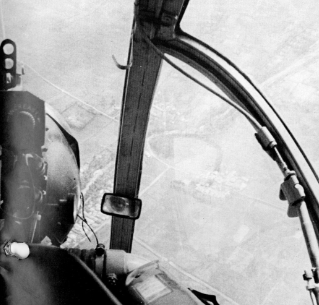 We were in a bit of a dive so, I wasn't sure if he wanted to take the images or would le me. Anyway, ground came back and told him to fire his marking rounds.  So, he gave me back the camera. pointed the nose of the cobra in the right direction and fired his first two rounds. 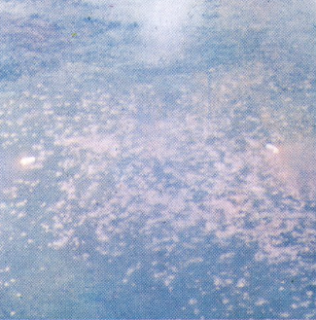 The first two we shot that day came out blurry as the sound from the Cobra cockpit is much louder than what you hear on the ground. When we realigned with another pair, I took this image.

We also fired the mini gun and the 40mm "chunker" grenade launcher. I thought both were going to go through the turret and come after me in the gunner area.

Then we fired for effect. 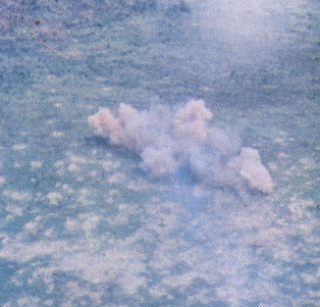 Notice that we aren't exactly center in this picture with the rounds as they went off.  That's because we were turning right while climbing. I took this shot from the left side of the canopy as we pulled up and away.

"Okay, we're done here.  Put your hands on the collective and cyclic and just feel what I'm doing back here. There's a 3 to 1 ratio between the back and front seat.  Notice it takes only a small amount of pressure in the front seat to make notiable changes to the way the Cobra flies. Now, I want you to think left -- I'm barely on the controls and your making the changes.

"See what happened? All you did was think left and just that bit of muscle control had us turning left. Now, straighten up the left turn and fly straight for the next few minutes."

A few minutes later, he took back control of the Cobra and we landed back at Camp Evans.

I'm not sure how I got out of the Cobra that day.  I probably was floating on clouds or something.

Not only had I got some pictures that I knew were totally awesome, I also got to physically fly a Cobra from the front seat.

It was the most memorable day of my time in Vietnam and it got recorded in Rendezvous With Destiny Magazine -- which just might out live me.