I'm going to change hats for a moment and talk about the reasons why vulnerability and changes in our tactical operations had to be be addressed.

At the time, providing tactical support for our soldiers on the ground when they could, pardon the play on words, see the whites of the NVA eyes, did equate to saving American lies.

To this day, I don't think we lost one pilot based on having clear daytime sight of the battle below our Cobras and the attack runs began at 3000 feet and ended at 1500 feet with the other Cobra rolling in and protecting the first as it climbed back up to 3000 feet.

The real problems ere with having to do night time sorties when a flair ship was involved and we had to artificially light up the target area. And where our Cobras were lower than 1500 feet and forced to do fire suppression missions -- similar to what the Cavalry was doing -- to get those MEDIVACs into a hot LZ so our soldiers could get prompt medial attention and not bleed out on the ground.


Significant changes to regarding the way the 4/77th Field Artillery would perform our mission was in the wind. And, after the Khe Sanh fiasco, for good reason. I think someone once related it to an "organized cluster fuck."

Khe Sanh and LAM SON 719 was, a wake up call. But it wasn't the first time the vulnerability of our helicopters to intense enemy fire revealed itself. The downing of a CH-47 over Firebase Ripcord which pretty much sealed the fate of that Firebase was a moment when vulnerabilities

Here's the point, for some reason, the "higher ups" envisioned our helicopters as being "less vulnerable" with us having air superiority then they actually were. Indeed, air superiority didn't include surface to air missiles or an enemy with a bow and arrow with a wire attached to it could bring down a helicopter just as easily.

Finally, with the purpose of the Cobra as an Aerial Artillery firing platform quickly coming to an end, with that concept being highly successful, attention was being turned to NATO and how the concept could be applied to the European confrontation of the 40,000 armored vehicles the WARSAW Pact had amassed against the NATO forces.

26 May 1972 was the day the first TOW Cobra was used in Vietnam and proved to be a system capable of extending the distance between an armor target and the TWO Cobra.  That distance was 2.1 kilometers or just short of a mile. Armored vehicles were vulnerable, easy targets.

And this was the beginning of a new evolution in the history of  US Army Aviation. One that would totally involve me in ways I couldn't even begin to conceive much less wrap my head around when it did slap me in the face.

The General most responsible for the pushing for the anti-armor attack helicopters is General George S. Blanchard. 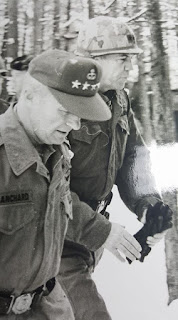 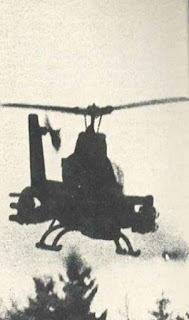 This image was also taken by me in 1977 in Germany. Published in Army Aviation Magazine.

By the time I ETSed in 1979, we had gone from slicks to blackhawks and the Apache was on its way.

So, that pretty much sums up what I know about the evolution of the Cobra I knew in Nam and the Cobra I took pictures of between 1970 and 1979. And while the 2/17th Cavalry isn't the 4/77th, the line in the sand, so to speak became less and less clear over time.

There is one LTC by the name of  Burnett R. Sanders  that without him and the help of LTC John A.G. Klose, the Division Public Affairs Officer, the rest of my legacy and my photographic work would never have happened.